Here I sit in The Mighty Revcon, sipping a frosty Newcastle Brown Ale, impossibly icy cold from the cooler and blogging about the first leg of the trip, the 199 miles to the Brady’s Leap Plaza on the Turnpike. 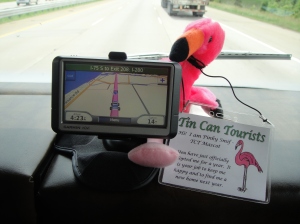 We made it down past toledo alone, then picked up Diane, Dot and John, and their group when we made a quick stop at a rest area just the other side of Toledo. Was good to carravan along the Tollway all together.

I got a few photos before disaster strick, Dianes 1936 Packard lost power JUST short of the next Plaza, stranding her on a very narrow shoulder. It started again after it cooled down a bit, enough to get her and her Bowlus trailer safely parked.

We all worked on it for a bit, then we sent the others on ahead. Between Diane bringing in the gurus via cell phone, John and I doing the troubleshooting, and Beth and Dot supplying moral suport (and beverages), we had enough people to fix it, if it could be fixed. Now I know what you are probably thinking…. old Packard, probably some rare old part broken. But it looks like it is the MSD ignition that died. After we all exhausted whatever ideas we had (its the ignition for sure, but not sure exactly what component) Diane called for a car hauler for the Packard, loaded with a truck to haul the Bowlus on the rest of the caravan! Never Say Die!

We left John, Dot and Diane about 97 miles back, they will bed down there and catch us up in the morning. We had Sabbaro Pizza at the wheel, on the fly, Made Brady’s Leap just fine, through some weird fog. Had a quick visit with the folks here, and then came in to write.

I will write more at the next stop, but for now… well that beer is still cold…… 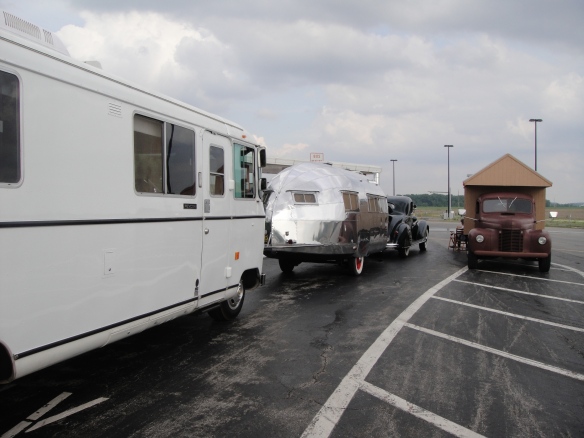 Fixing stuff in the Bus Lane